Anyone even remotely familiar with the Boerejongens coffeeshops knows what you mean the minute you mention a ‘Bowler Hat Man’. These striking characters are a defining feature of life in and around our shops; if only because they’re so hard to overlook. Still, these Neighbourhood Hosts, as they’re officially known, amount to much more than just the distinguishing face of Boerejongens venues. This week, an article by Telegraaf national newspaper put them in the spotlight: high time we did a little hats off to the Bowler Hat Man ourselves!

They’re friendly and polite. They’re always there, rain or shine, and their characteristic style – bowler hat, three-piece suit, well-mannered – easily qualifies as impeccable. By now, the Neighbourhood Hosts have become part and parcel of the Boerejongens environment – just as we intended. They ‘re integral to the overall image of a coffeeshop that aims to be much more than just an outlet for top quality cannabis. At Boerejongens, we genuinely feel we are part of the city, the neighbourhood, and the street where we do our job. Our establishments have a clear social function: we play  our part in our environment. We take that part seriously, and our Neighbourhood Hosts have been helping us excel at that for years now.

So are Neighbourhood Hosts security guys? You bet they are! At the first sign of commotion, aggression, or arguments in or around the shops, they step in professionally to maintain order. That’s a comfort in and of itself. And yet, these gentlemen are a few steps ahead of your average bouncer – with all due respect for fellow security personnel, of course. A Neighbourhood Host is proactive: always keen to chat with customers, neighbours, and passers-by. They’re like social thermometers, really, with a keen sense of the social climate. That’s how they stay in touch with their surroundings. If anything’s amiss, all the locals know where to find their Host. Not that they’ll usually need to, mind you: potential trouble is generally spotted way before it starts acting up, Bowler Hat Men act preventively, socially, and politely: that’s what we call more secure than security.

The recent newspaper article highlighted the Neighbourhood Hosts’ new function now that the corona crisis changes street life as we knew it. These strange times call for a bit of extra guidance, and these pros are happy to rise to the challenge. There’s no tourists in town these days, but as the lockdown is becoming the New Normal, Amsterdam citizens tend to grow a bit more reckless. We run the risk of letting our guard down. When that happens, a casual reminder is all it takes for our sense of responsibility to return. It just goes to show how useful these fine gentlemen really are.

Social responsibility comes as naturally to these hosts as the hats that made them famous. From adopting garbage bins in the street to cleaning trash off the pavement, and from a chat with the guy next door to carrying some lady’s groceries up the stairs: it’s all part of the game. We’re seeing the results, too, because the neighbours’ appreciation is palpable. You can just feel the atmosphere improving because of a bowler hat and a smile, rather than sunglasses and a grumpy look. Strict when necessary; sociable whenever possible: Boerejongens and every single one of our neighbours are a Bowler Hat Man Fan! 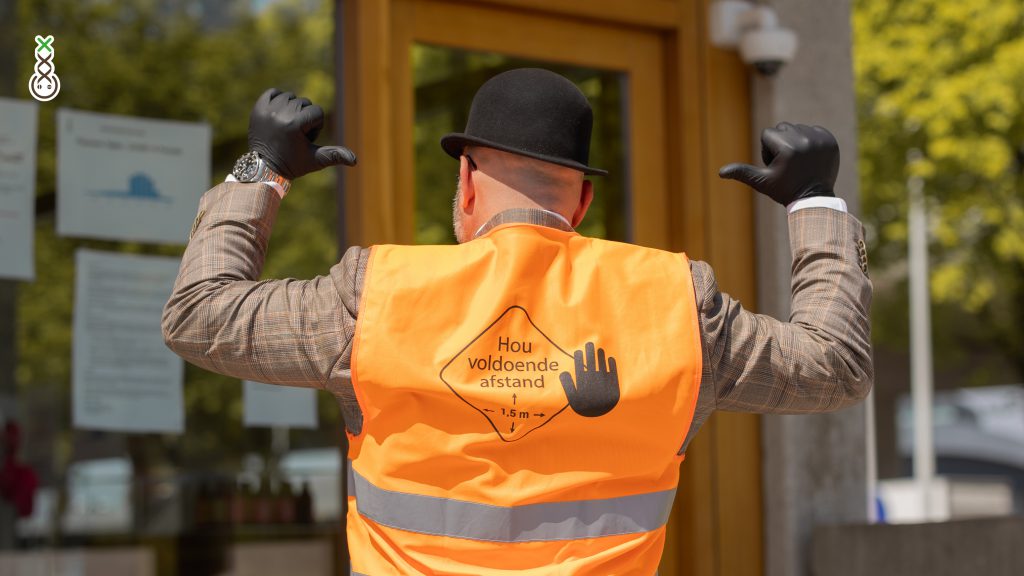