Cannabis hippie culture – for many, it represents the golden age of cannabis history. But how much has this cannabis culture changed over the years? Do modern-day hipsters have the same relationship with weed as the hippies did before them? Let’s paint a general picture of how far we’ve come by a brief review of cannabis culture evolution. We’ll start at hippie culture as we saw it in the Sixties.

Ahh, the Sixties… It was a time of free love, psychedelic exploration, and rebellion. The threat of nuclear attack was a constant presence, and for the first time ever, the horrors of the Vietnam War were shown to the world on TV. We put a man on the moon: humanity had never been so high before. Generally speaking, the decades from 1960 to 1980 were a period of turmoil. Old values, lifestyles and social institutions were criticized and uprooted. Revolution was in the air, and a new generation of ‘hippies’ born in post-WW2 freedom, demanded its place in the world.

In a reality where death and decay we never far, with increasing clashes between social groups, the time was right for a radical new worldview. The public turned inward, experimenting with a wealth of rebel solutions, including cannabis. In 1957, at the dawn of the Hippie Age, Harvard professor Timothy Leary made his case for therapeutic use of psychedelic mushrooms and LSD.

In that same period, psychiatrists such as Dr. Lester Grinspoon started to speak out against the prevailing anti-cannabis propaganda, pleading for therapeutic use of weed instead.

From Rebellion Into The Mainstream

Technology is claimed to be a major factor in the evolution of cannabis culture. Back in the Sixties and Seventies, the majority of cannabis products was smuggled in from overseas. The War On Drugs complicated that. Governments tried to stop international drug trafficking. That made import and distribution of cannabis increasingly difficult.

Despite all repression, however, cannabis ultimately prevailed. Public views were shifting, and hardliners lost control of the situation. Ever-improving technology did its part, too. The War On Drugs forced people to grow and improve their own weed. Refined (indoor) growing techniques made homegrowing easier. Even though Sixties weed doesn’t come close to modern strains, hippies kept getting better and better cannabis  to fuel their ideals of Peace & Love.

The new cannabis strains did more than just make the weed stronger, though. Hippie growers also caused a new community to blossom. An emerging society of cannabis growers went through an underground process of growth and development.

This community only got stronger as technology and society progressed. In 1969, some 12 million US citizens admitted to having smoked cannabis. Today, over 140 million people in the USA have tried weed. This is a leap from 12% of the population to 44%.

The shift in cannabis use and image was caused by many factors, but few are as important as the rise of the internet – another product of the Hippie generation. Easy access to positive perspectives on weed changed how the world sees this plant.

Recent surveys indicate that it is easy to find positive information about cannabis; easier than finding negative info, in fact. That’s a game changer, because socials are the main source of news information for young people today. In 2015, 58% of Americans thought that cannabis should be legalized. Other studies suggest that the general public now regards alcohol and opiates as bigger health threats than cannabis.

Cannabis has officially entered the mainstream. For the first time in history, a US majority supports medical as well as recreational cannabis use. We owe a large share of that shift in perspectives to long-haired, pot-smoking, guitar-playing hippies.

From Hippies To Hipsters

As said before, technology changes how we look at cannabis. In recent decades, the media have transformed cannabis itself. Weed has gone through a real metamorphosis. Where it once was a symbolic product for barefoot hippies, it became a favorite pastime for lazy high school dropouts; only to become a consumer good marketed as a novel, first-class treat or medication.

To be sure, cannabis is still illegal in most places, but the days when weed was for misfits and losers are well behind us. These days, a range of cannabis products find their way to the shelves of high-end pharmacies and specialist outlets.

In 2014, The New York Times published its first advert for a startup selling cannabis technology. If you have the money today, you van buy 600-euro vaporizers and custom luxury sofas designed to add comfort to your cannabis smoking experience.

It wasn’t just technology that kept evolving, either: cannabis advocates have changed as well. Upstart hippies have been replaced by slick hipsters. These newcomers combine a high-tech market mindset of the Eighties with an entrepreneurial and green take on the global economy.

To illustrate the point, millennials experiment with homeopathic or natural medicine twice as often as babyboomers do. They are bolder than the hippie generation commercially, too. Hipsters don’t sneak off into the park to smoke a stealthy joint; they approach brands and help them design products that match their own values.

To name one example: Meadow, a new Silicon Valley startup, aims to be the Uber of cannabis. They pick up your buds at your favorite dispensary and deliver them to your doorstep. 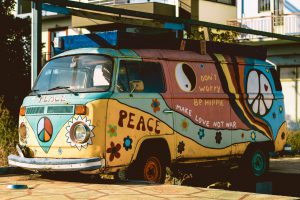 Lasting Influence Of Hippies On Cannabis

While hippie era weed has gradually made way for a much more commercial type of cannabis, today’s cannabis consumers are still heavily influenced by hippie culture.

Just like jazz and reggae cultures, hippy culture made a lasting impression on how we look at weed today. It’s about much more than marketing and mainstreaming. Even though times have changed dramatically, the deep-rooted ambitions for peace, love & happiness still echo throughout global cannabis culture.

The world changes; weed changes, and we ourselves keep changing too. Still, cannabis culture has roots that are worth keeping alive. Perhaps true hippies are now extinct, but their ideals still ring through in the weed we smoke today. Peace Out.