King’s Day 2020 in Amsterdam is once more upon us and it’s promising to be another great year for this national holiday! In this article we inform you about the day itself (the meaning of King’s Day). Also we inform you about all the upcoming events and activities, so you can make an informed decision on where to go for King’s Day 2020 in Amsterdam! So grab your calendar and sit back for this article. Monday , April 27th, King’s Day will be upon you!

The King’s official birthday (King’s Day or “Koningsdag”) in the Netherlands is celebrated each year with parties, street markets, concerts and special events for the royal family on April 27. King’s Day is an official public holiday in the Netherlands. Banks, post offices, and many businesses are closed. Opening hours in stores vary. Some stores are open as usual, some are open for part of the day, and some are closed all day. Public transport runs to a normal or special timetable and there are extra train services to take people home from large celebrations. However, buses and trams in the center of large cities may have different or shortened routes to avoid the crowds. Restaurants may be shut, open as usual or only serving special “King’s Day” meals. Cafes and restaurants may close earlier than usual.

Due to mass celebration, it is difficult to reach many addresses in the center of large cities, especially Amsterdam by most forms of transport. Apart from minor criminal acts such as pick pocketing and urinating in public, King’s Day events are usually very peaceful.

In Amsterdams “Meerpark”, the greenest location of all festivals, you will find the anniverary edition of ‘Loveland van Oranje’. According to the festivals organization, the line-up only consists of ‘royalty’. Dance and sing along (if you dare) to the tunes of Amelie Lens, Pan-Pot, ANOTR and many many others! 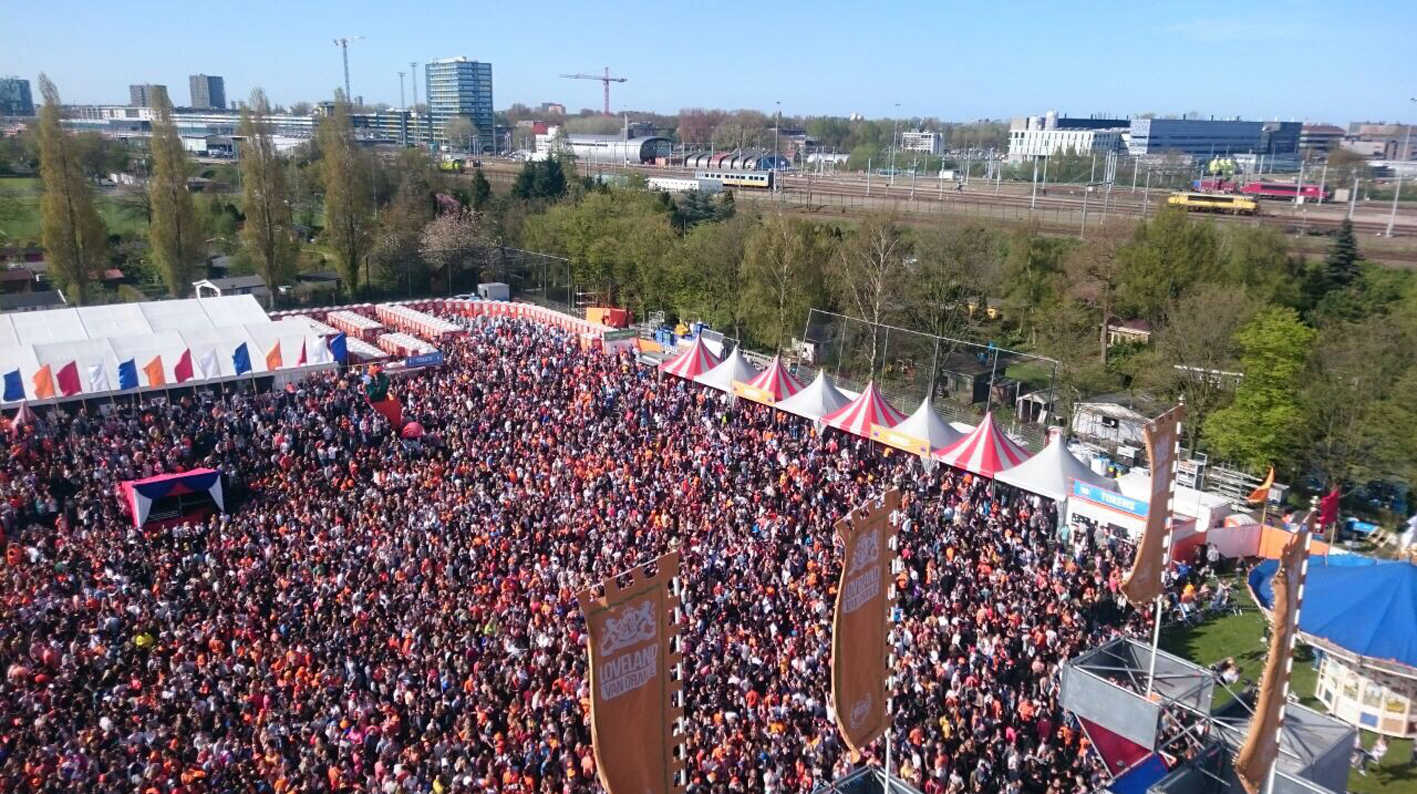 The Bredewegfestival is a yearly recurring festival. Last year the weather way rainy, but the majority of the rainfall missed to festival. And the rainfall that did hit the festival was barely noticed. Because it’s a great party. For everyone, by everyone! The festival is held in Amsterdam-Oost, Watergraafsmeer. In 2020 the festival will return. The festivities begin the night before King’s Day with ‘Opera on the Street’. During King’s Day there will be live music on several stages, lot’s of things to eat and workshops, a carrousel and other activities.

Oranjebloesem keeps evolving with more and more space for techno and remarkable artists. Enjoy artists like Joris Voorn, ‘De Sluwe Vos’, David Vunk and many others. Join us in the most sustainable festival Amsterdam has to offer during King’s Day. Visit Oranjebloesem in the Olympic Stadium!

One of the most recognizable images remains that of the Vrijmarkt. Days in advance, the pavements are set off by enthusiasts who empty entire attic rooms to sell their second-hand items during King’s Day. Be early if you want to have an extensive choice, because before you know the best items are gone!

King’s Day is one of the biggest crowd pullers of the year in Amsterdam. On this day, the city has an even greater attraction for people from all over the world. This royal, colorful event has special meaning for the LGBTI community.

Despite the fact that King’s Day is not an official “pink event”, it may well be that your opinion changes after you have visited the famous gay spots in Amsterdam on this day. Because, together with the Gay Pride in the last week of July and the first week of August, King’s Day is one of the two largest pink events in the city.

Visit the Homomonument or the PRIK location to dive into pink King’s Day 2020 in Amsterdam!

Foods and drinks during King’s Day

A party of course also means great foods or drinks! And especially take a visit to the vegan restaurants that we have previously highlighted for you, or visit one of these hot spots!